Thanks Rose, for sending us this article. 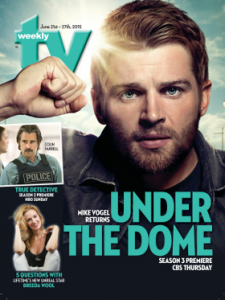 The fiercest enemy happens to be trapped with everyone else under “The Dome” — which we’ll learn when Season 3 of the CBS Summer Drama begins with a two-hour premiere Thursday. “This season we concentrate on the enemy within”, says Mike Vogel, who plays the intrepid Barbie. “Circumstances have happened to [the residents of] Chester’s Mill. There has been an enemy within and we spend the season addressing that sort of thing that has become pervasive”.

Vogel is excited that the show is heading in a new direction with new cast members Marg Helgenberger and Kylie Bunbury and a new showrunner. “Tim Schlattmann is coming to us from “Dexter” and helping to run our show”, Vogel says.

“And he brings with him a lot more of that cable mind and deep sci-fi history. Last year was interesting. We got locked up in a lot of calamities and disasters. And this year we certainly take the sci-fi much further than we were able to address in the last two years”.