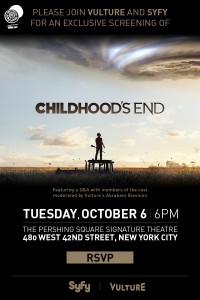 About: A three night miniseries event based on the novel by Arthur C. Clarke, author of 2001: A Space Odyssey, “Childhood’s End” is a story about the peaceful arrival of a mysterious alien race on Earth.  Intervening at what they perceived to be a tipping point for humanity, the Overlords provided the means for people to live happy and healthy lives. No war, no disease, no poverty, no pollution. They’ve given mankind a Golden Age. But what will they want in return?

Updated! Unfortunately Syfy had to postpone tomorrow’s screening event in the last minute. The reason to this sudden change is still unclear, but we will keep you all updated with what happens.

EventBrite says: “Due to circumstances beyond our control, the Childhood’s End screening event originally scheduled for Tuesday, October 6th has been postponed. We will update in the near future with the new date and time”.