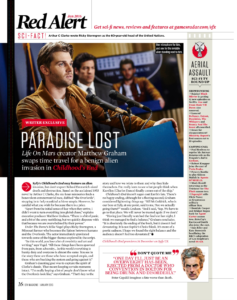 Syfy’s Childhood’s End may feature an ailien invasion, but don’t expect Roland Emmerich-sized death and destruction. Based on the acclaimed 1953 novel by Arthur C. Clarke, the six hour miniseries finds a benevolent extraterrestrial race, dubbed “the Overlords”, stepping in to help mankind achive utopia. However, be careful what you wish for because there is a price. “Apart from the initial sense of fear when they arrive, I didn’t want to turn everything into global chaos”, explains executive producer Matthew Graham. “There is a bit of panic, and a bit of the army mobilising, but we quickly dispense with that because we are overwhelmed by their power”.
Under The Dome’s Mike Vogel plays Ricky Stormgren, a Missouri farmer who becomes the liaison between humans and the Overlords. The actor immediately gravitated towards some of the bigger themes explored in the script. “In this world, you lose a lot of creativity and art and writing”, says Vogel. “All those things have been spawned from pain, from adversity… In this world everything is hunky dory and everyone is almost the same. You see, in the story there are those who have accepted utopia, and those who are buckling the system and going against it”.

Graham’s daunting goal was to capture the spirit of Clarke’s classic. That meant keeping certain moments intact. “I’m really hoping a lot of people don’t know what the Overlords look like”, says Graham. “That’s key to the story and how we relate to them and why they hide themselves. I’m really keen to see what people think when Karellen (Charles Dance) finally comes out of the ship”. Childhood’s End doesn’t sugar coat Earth’s fate. There’s no happy ending, althrough for a fleeting second, Graham considered lightening things up. “Bill McGoldrick, who is our boss at Syfy, at one point, said to me “Are we actually going there?” recalls Graham. “And I said, “Yep. We have to go to that place. We will never be trusted again if we don’t”. Having just literally watched the final cut last night, I think we managed to find a balance”, Graham concludes. “It’s absolutely the ending of the book, but it doesn’t feel devastating. It is not “Sophie’s Choice” bleak. It’s more of a poetic sadness. I hope we found the right balance and the audience doesn’t feel too devastated”.