“Under The Dome” starring Dean Norris, Rachelle Lefevre and Aisha Hinds is available to pre-order on Blu-Ray and DVD at Amazon.com, without a Release Date since the show’s debut last month on CBS. At today’s Comic Con Panel it was announced that “Under The Dome” Season 1 would make its Blu-Ray and DVD debut on November 5, 2013. 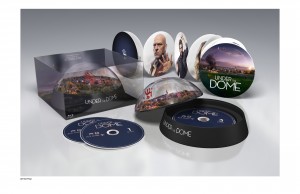 It was also announced during the Comic Con Panel that Season 1 of “Under The Dome” would end in a cliffhanger. Though CBS has not formally renewed the show for a second season yet, the green light seems like all but a formality at this point given the show’s continued success.

The Blu-Ray edition of “Under The Dome” Season 1 will include all 13 episodes spanning 4 discs, and be presented in 1080p video and 5.1 DTS-HD Master Audio. Bonus Features have not been detailed as of yet. Amazon is offering an Blu-Ray exclusive Limited Edition in Dome packaging that will additionally include its own set of exclusive bonus features on top of the ones in the standard Blu-Ray release.