A few days ago Mike’s “Under The Dome” co-star Rachelle Lefevre got on Twitter and wanted to warn her fans about fake Mike Vogel accounts. Not knowing that the @Mike_Vogel Account is used for Mike’s Official Fan Site, Rachelle let her fans know that Mike didn’t have a Twitter and that @Mike_Vogel wasn’t Mike. When I saw her tweet this, I didn’t have any issues with it, because I simply state on the Twitter Bio of the profile that I’m not Mike and will never pose to be anyone. Soon I began to see @Mike_Vogel‘s followers drop, and very concerned about Mike losing followers, I e-mailed Mike and updated on what was happening. The next morning he let me know he had spoken to Rachelle that she would clarify the misunderstanding. I thanked Rachelle and understand that she only wanted to protect him from Mike posers on Twitter.

Since then, Mike has seen that there has been a strong reaction to what Rachelle had tweeted, and so he decided to address exclusively to Mike-Vogel.com and Twitter users. He talks about the Twitter reaction revolving around his “Under The Dome” co-star Rachelle Lefevre, clarifies about whether joining (or not joining) Twitter and mentions me running his Official Fan Site. Thank you, Mike. We are super grateful that you took your time to write this letter. 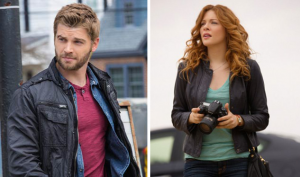 I apologize for the uproar the last couple of days. I am surprised at how serious a reaction people are having because of Rachelle’s tweet. She was simply trying to protect me, for which I am grateful. Aaron, the man who runs this feed, site, etc, has dealt with a huge amount of fallout since then, for no good reason. He has been honest and upfront about the fact that he is NOT claiming to be me. Aaron has run my fan site since 2003. He is a great great guy, and provides a great amount of information about me and my career so that those that are interested can follow me. From time to time I will check in with the site and send a message out to everyone, as I am doing now. I may or may not join twitter at some point in the future. I am a private person and social media challenged :). Until that happens, I want to make it clear that I support the work that Aaron has done for me, to this point, and encourage everyone to rally around him. I cannot thank all of you enough for your support of my career all these years, and hopefully there are many more to come. Much Love!!