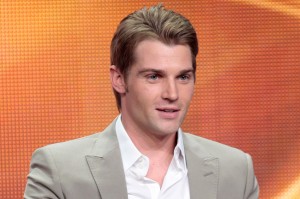 Mike will star in the new Syfy-thriller Mini Series “Childhood’s End” as the midwest-farmer Ricky Stormgren.

Syfy’s “Childhood’s End” has found its lead: EW can exclusively report the Mini Series has cast Mike Vogel (“Under The Dome”, “Bates Motel”) as Ricky Stormgren, a midwestern farmer whose life is turned upside down when he is chosen to be the sole representative on Earth for an alien species apparently seeking to aide humanity. “Ricky struggles with his new-found fame as a blue collar prophet, facing the weight of the entire world looking to him for answers”. Vogel joins Emmy nominee Charles Dance (“Game Of Thrones”), who will portray the alien Overlord Karellen, along with Ashley Zukerman (“Manhattan”) and Osy Ikhile (“Clap!”).

“Childhood’s End” is a six-hour Mini Series adapted from Arthur C. Clarke’s 1953 novel and is produced by Akiva Goldsman (“Lone Survivor”) and Mike DeLuca (“Captain Philips”), with writer Matthew Graham (BBC’s “Life on Mars”). The show will premiere next year and is one of several productions embracing traditional science fiction that are in the works at Syfy.