Down below you can read an exclusive Entertainment Weekly interview with director Craig Macneill where he tells about “The Boy”. Also, get the first poster-glimpse! The movie premiere is set for March 14th at the Southwest Film Festival. 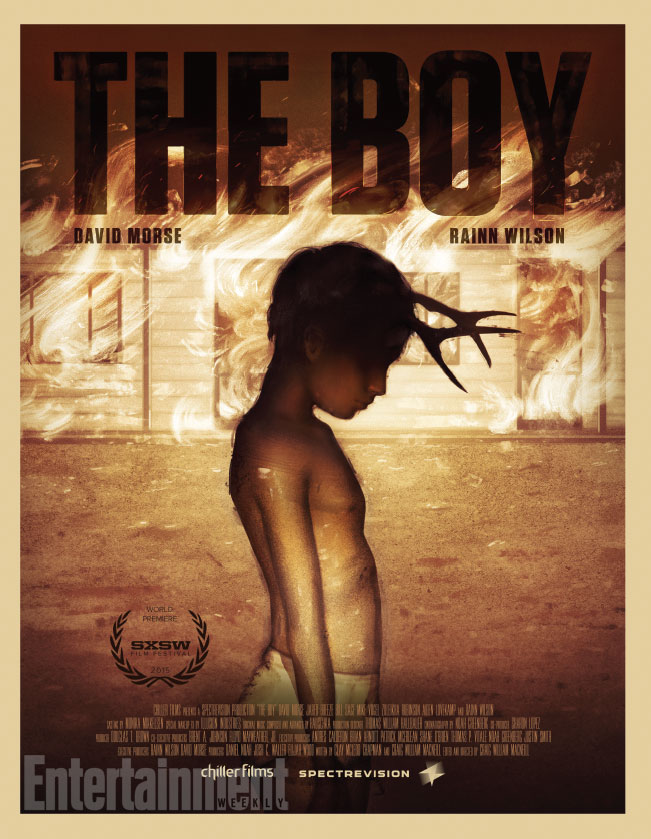 How is a maniac made? That’s the question director Craig William Macneill addresses in his movie “The Boy”, which is premiering at this month’s SXSW Festival in Austin, Tx and whose poster you can exclusively see above. Written by Macneill and Clay McLeod Chapman, the film stars Rainn Wilson, David Morse, and Jared Breeze as the titular child.

“It’s essentially an intimate portrait of this nine-year-old boy’s growing fascination with death”, says Macneill, who makes his feature debut with the movie. “It’s a character study of what will be a future madman. The story takes place in the summer of 1989 and centers around this kid named Ted. He lives with his father, [played by] David Morse, in this crumbling motel which is buried in the mountains of the American West somewhere. The boy’s mom left a while back, and his dad has drifted into despondency, and he’s sort of left Ted to fend with himself. And it’s in this isolation, without parenting, that this kid’s darker impulses begin to manifest”.

As for Rainn Wilson, the filmmaker says the “Office” star plays “this mysterious, unpredictable drifter. He and the boy form this friendship, which ultimately sets the stage for our boy’s final, unnerving metamorphosis. I don’t believe people have seen him do a character quite like this”.

Macneill shot the film in Colombia. Why not in the American West — which we’re pretty sure is actually the home of the American West? “It’s true!” the director laughs. “However, our location needed a very specific highway and an old, rundown, desolate motel in the middle of nowhere—and we couldn’t find anything. I, of course, had always dreamed of building our own motel from scratch but that always proved too expensive here in the States. And this was where the idea of filming in South America came up. As a result of some great tax incentives, we discovered that we could film there, and build this motel from the ground up, and create it exactly how I envisioned it. That was really exciting”.

“The Boy” is produced by SpectreVision — the horror film company founded by Elijah Wood, Josh C. Waller and Daniel Noah — in partnership with Chiller Films. Macneill says he was approached by Wood and his partners after his short film “Henley” screened at the 2012 Sundance Festival. “Dan, Josh, and Elijah came across the film and were eager to discuss turning it into a feature with us,” explains the director. “It was very clear from the start that they were a great fit and over the next several months we worked on the script together”.

“The Boy” is the first entry in a planned trilogy, which will track the character over a 10-year-plus period. But Macneill says he is going to eschew the example set by Richard Linklater’s Before… trilogy and that we won’t have to wait a decade to see all three films. “I hope not”, he laughs. “I’d like to bang these out, if I can”.