Syfy is bringing an iconic alien invasion to TV screens in December, one that’s eerie without starship battles or the destruction of national landmarks. When the Overlords arrive in the three-night, six-hour miniseries “Childhood’s End” (premiering Dec. 14), they’re a benevolent force from outer space wanting to help mankind and to turn Earth into a Utopia. But once their endgame is revealed, star Daisy Betts says, “It’s not necessarily a happy ending”.

“Childhood’s End” is based on the 1953 Arthur C. Clarke book, a precursor to sci-fi staples such as Independence Day and V, says Syfy president Dave Howe. “It’s probably the most influential and important science-fiction novel, period. It’s the granddaddy of them all.”

The story and themes hew closely to the novel, says executive producer Matthew Graham (“Life on Mars”). One ordinary day, the Overlords come down from above and the voice of Karellen (Charles Dance) announces his role as a “supervisor” to get Earth ready for a new Golden Age after mankind has been screwing up the place. But people aren’t ready to see the invaders yet, so 15 years pass as Earth is transformed into a peaceful and bucolic — though boring and bland — place. Some residents welcome their new alien Overlords while others resist the occupation. 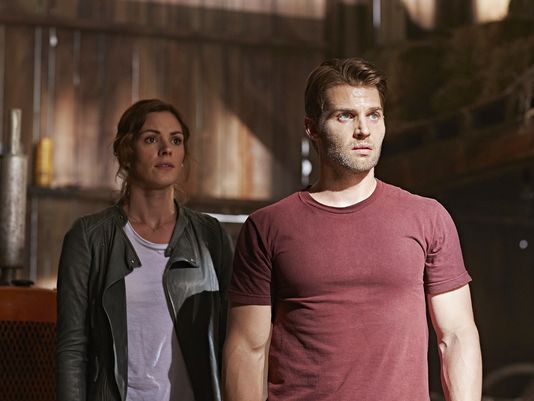 The original story featured the head of the United Nations as its main character, but the TV version focuses on Ricky Stormgren, a Missouri farmer played by Mike Vogel (“Under the Dome”) who’s handpicked by Karellen as a go-between tasked with bringing the Overlords’ messages to his fellow earthlings.

“When faced with the opportunity of a Utopia and the opportunity of what could be an easy existence, he chooses more of a hard road”  Vogel says. Ricky begins to enjoy the fame of his new gig as the “Blue Collar Prophet,” and it takes a toll on his marriage to Ellie (Betts), a high-profile photographer who gave up her professional life for her husband.

Ellie provides a human perspective to their existence, and there’s a lot of anger and sadness for her, Betts says. “There is all this greater good. But she’s a little bit selfish in the fact that she’s like, ‘I wish they never came. I wish they’d never destroyed our relationship’.”

Other characters show different sides of this new society. Peretta Jones (Yael Stone, Orange is the New Black) clings desperately to her faith and wants real answers about Karellen, the voice of God for many. Milo Rodricks (Osy Ikhile) is a former boy genius whose curiosity hits a fever pitch when the Overlords’ crafts descend upon cities. And Rachel Osaka (Charlotte Nicdao) is indifferent about Karellen’s presence, though her boss, wealthy philanthropist Rupert Boyce (Julian McMahon) is more than a little intrigued.

“And as a result, you look at what happens to Noah’s wife or what happens to Moses’ family, the people who are left baffled and alienated” Graham adds. “They feel excluded”. A central dynamic is Ricky and Ellie’s struggles, and to craft that relationship, Graham says he took cues from the Old Testament, in which God would play “kingmaker” and pick a shepherd or a goatherd instead of someone of high stature and say “I have a massive job for you”.

In a sense, Ricky and Ellie are powerless, Betts says, and for Graham, that factors into the main theme of “Childhood’s End”: the acceptance that the universe runs in a particular way, whether we like it or not. “This applies to the Overlords” he says. “You can perceive what they do as good or evil, but that would be like calling cancer evil. Cancer isn’t evil, it’s just a thing that exists. And death isn’t evil, it’s just a part of how creation works”.