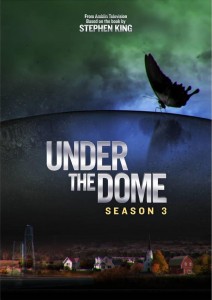 In Season 3 of “Under The Dome”, the line between friend and foe continues to blur. After a life-changing experience in the tunnels beneath the town, the people of Chester’s Mill are trying to move on. But the arrival of a new resident and an opportunistic corporation prove that’s not going to be easy. As the Dome’s purpose begins to unravel, it becomes clear that some won’t make it out alive.

CBS Home Entertainment and Paramount Home Media Distribution have announced that “Under The Dome” Season 3, the final season of the show, is coming to DVD and high-def Blu-ray Disc this winter. Each format is a 4-disc set, available on December 8th, with the following extras: Extended and Deleted Scenes, Return To the Dome: A Look at Season 3, Life Under The Dome: Behind-the-Scenes of Season 3, The Season Finale, The Device, Meet Indy the Dog and Gag Reel.