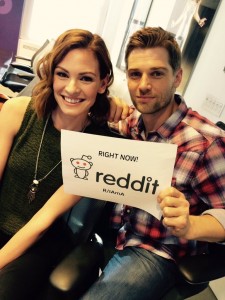 What drew you the most in Chidhood’s End? Was it the script or the cast? Thanks WOOOOO! I’m here.. finally. Okay, initially, it was the script that excited me, but after getting to know the cast, that became the best part

Are you still in contact with the Under The Dome cast? I miss the show:) and would you consider doing a comedy one day? I am. just spoke with Rachelle and Eddie the other day. love those folks

Whose careers would you like to emulate, and why? I don’t have anyone in particular to emmulate..I just want to work until i cant work anymore..I love what I do, and I’ll do it as long as i can keep tricking them into hiring me!

Who were your heroes growing up? My Father and Grandfather were big heroes in my life. Chuck Yaeger and other pilot aces were heroes as well, given my love for flying

What do you believe happened to Barbie and Julia after Under the Dome ended? Would you come back for a fourth season? I think Barbie and Julia went on a baby making spree. i would have done a 4th season just to be with the cast. loved them

How was it like to work with Stephen King? Man’s a genius. Gratefully to have had the opportunity

What was your favorite scene to film in Childhood’s End? I would say everything we did out on the farm. i love wide open spaces, so……

Have any one of you ever been to Liverpool and had a pan of scouse? Cant say that i have….but love me som clotted cream for sure!

I’ve watched Grind I don’t even know how many times. One of my favourites. What’s one of the funniest scenes you guys shot for it? All of them…. we were young and dumb and getting paid to do stupid stuff. does it get better?

Why do you think Childhood’s End will work better as a TV series than a movie in theaters? Absolutely. it needs that format. it would be a 6 hour movie otherwise. We had to really whittle it down as is

Have you ever attended a convention, if not, would you consider coming to DragonCon? Only been to comic con so far

How far do you like working on that Sci-fi genre? Would you do another Sci-fi project? I love sci-fi because it is super immaginative. that said, I also enjoy variety mixing in different genres, so….

If you had to compare Karellen to any real-life president or political leader who would it be? I dont know that we’ve had leader to this point with the ability to unite and yet hold so much power as does Karellen. Maybe for the best

Let’s imagine there is an alien invasion and they take control of Earth. What’s your first course of action? How would you react? Not ur character, but you, Mike)) Do you believe the aliens can be friendly? I don’t know that that could be done peacefully. How do you penetrate the defenses of earth without a healthy dose of skepticism? My first move is to head underground until their intentions become clear

Would you ever sign up for no/low paying short films, if the concept and character were interesting? What would your conditions or considerations be? Already have

Anything interesting happen on Wuthering Heights? Man, that was so long ago. I think recording at the Hit Factory in NYC was pretty cool

If the show do great, can we get a second season? I’m very expenssive ;)

Will we see Ricky siding with the overlords against humans eventually? How far will he trust them? Yeah, it doesn’t take very long to see that offer of a golden age for man isn’t without strings. it will ultimately cost dearly

What’s your favorite movie you’ve acted in?! My fave of yours is grind no lie The Help was one of my favorites

You guys are awesome! Have you been able to bring in own ideas or additions to your scenes/dialogues while shooting CE? Absolutely. it was a very collaborative process. We had to make it our own because the ideas themselves were so big

Describe your own version of utopia. How do you see it? Im living it. My family and I together, on so much land that i can’t see my neighbors. It’s heaven

If you were given a choice of Utopia on Earth, but the consequnces were super vague…would you take it? After doing this movie, i wouldn’t take it on any level. I believe at the heart of humanity, our capacity to love can far overshadow our ability to destroy

What inspire you on the show? I think the love story between Ricky, Ellie, and Annabelle was beautiful. very emotional, and painful, and hard to navigate. Amazing actress’s to work off of

Will you guys be live tweeting during the episodes? We count on that! Absolutely!

What’s common between you and Ricky? I think we are both old school kind of guys. we enjoy being out there on the land. struggle with technology. simple life with the ones we love is what is important both

Do TV or movie critics actually matter to you? I could lie and say no, but……

I’ve read the book recently, how close are your characters in the show to the book’s ones? Well, Daisy’s character isnt in the book, and mine is a 60yr old head of the UN, so i’d say a little different, but the main themes of the book are all preserved

Can Karellen be trusted? Absolutely……which is not neccessarily a good thing

What would barbie have done if he was in Ricky’s place? Do you think the overlords would have chosen Julia or him as their messenger? Hopefully julia. they’d have had better success

Are there actually also female Overlords? Like Overladies or sth? There are ALWAYS female overlords…..ALWAYS….just ask my wife

Would you ever consider moving back to Pa? Every day of my life. If it wasnt so far from LA, i would

In general, are you of the opinion that it is more of a curse or more of a blessing to turn highly successful books into TV Shows/movies? Its a tough one. i am a visual person, so putting incredible writing into visual form is a bonus for me….that said, A LOT can get lost in the translation process. It’s not always done successfully, but when it is, its worth it