There are good reasons why some pieces of literature, even hugely popular ones, maybe shouldn’t be adapted to screen. But, that’s never stopped anyone from trying. Syfy is the first to take a visual stab at Arthur C. Clarke’s 1953 science fiction novel “Childhood’s End”, which deals with deep and difficult themes about humanity, and what ultimately makes us unique as a species. Some of those themes will feel familiar, having been cribbed for countless TV shows and movies, but none have so far dared to go as close to Clarke’s original material as this three-night event series.

“Childhood’s End” takes place at a moment in time when alien ships have arrived on Earth, hovering over major cities, and quietly placing all aircrafts down gently, “settling like feathers”. The Overlords are here, yet there is no reason to be afraid. They come as guides, hoping to usher in the Golden Age of Man. Under their care, there will be no more war, famine, disease, or even internet trolls. It’s a utopia that only fools would rebel against. So no one does. But the question still weighs heavily on some: Where is this all leading? 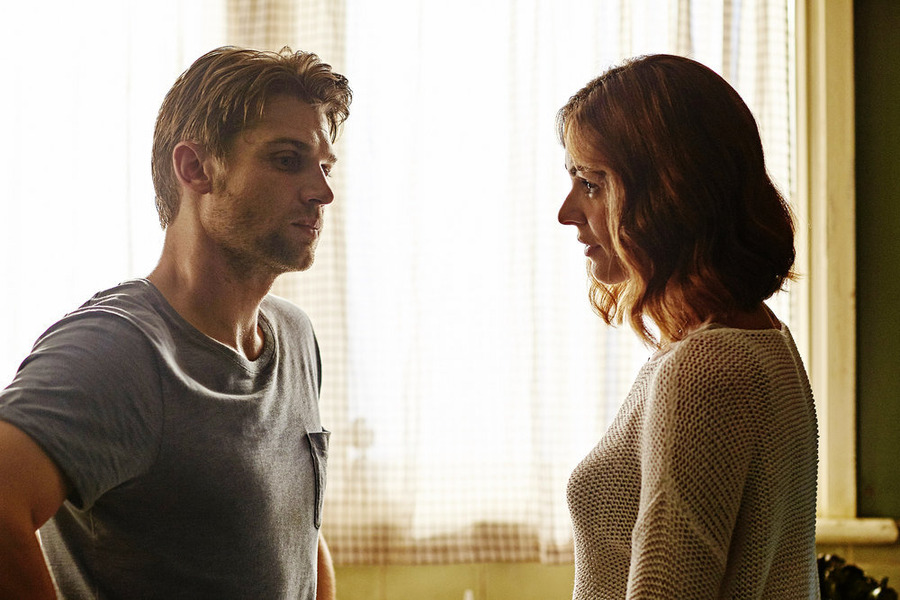 The miniseries focuses primarily on a handsome midwestern farmer, Ricky Stormgren (Mike Vogel, who only recently escaped from “Under The Dome”), chosen by The Overlords as a kind of spokesman. He’s ill-equipped for the magnitude of the job, but there’s not time to explore that. Instead, it’s through Ricky’s relationship and communication with Earth’s “supervisor” Karellen (Charles Dance) that we come to know more about the Overlords and their desires to “help” Earth. Ricky is on board immediately, but many are not, including Colm Meaney as a kind of Rupert Murdoch media figure, who worries that we Earthlings are merely being peacefully led to slaughter.

Admist the well-wrought visuals (with some admirable practical effects later on) are also not as well considered stories of creepy children (standard sci-fi fare) and an interesting, though largely sidelined plot about the death of scientific inquiry in an age where humans want for nothing. “Orange Is The New Black”s Yael Stone is also put in the unfortunate position of being the miniseries’ sole bearer of faith — which is a predictably losing battle in this kind of tale — and her half-baked story quickly loses steam in the event series’ poorly-paced second installment.

In fact, that 3-night event format feels like both a boon and a mistake. Because it’s full of engaging twists and turns, “Childhood’s End” is the very definition of appointment television. But the miniseries also strips down the book’s material in a way that takes away its compelling nature, failing to connect disparate stories, and leaving its central characters without much nuance or interest. The exception to this is Charles Dance as the Overlord Karellen, who exists for a large portion of the story as simply a voice (but oh what a voice!) As the alien, his presence (even just vocally) is both commanding and soothing. He exists as the manifestation of the Overlord’s paradox: helpful friend or deceptive foe?

The individual parts of “Childhood’s End” could have each made for a fascinating story on their own: Ricky’s wary friendship with Karellen, the desperate attempts to keep the scientific pulse alive (carried out by Julian McMahon’s Dr. Rupert Boyce), as well as the desire to find out the truth of the Overlords at whatever cost Osy Ikhile plays a brilliant young man on that journey). But this adaptation doesn’t seem to know where its strengths lie, and in an attempt to give unnecessary time to too many characters, it ends up muddled instead of the sharp commentary it could otherwise be.

“Childhood’s End” is worth watching, and it’s easy to get drawn in as its mysteries unfold. Certain revelations are even gasp-worthy. Others less so. But while the series’ premise is positively dripping with ill portend, it ultimately fails at creating the right atmosphere to properly pace those obvious tensions. The Overlords appear to have found the right way to placate humanity for their own goals, but Arthur C. Clarke’s material hasn’t quite found its right home on screen yet. Still, to paraphrase a plea from Ikhile’s Milo that starts the series: just because it has flaws doesn’t mean it should be ignored.