“The Vietnam War” isn’t the only military story TV’s telling this fall.

Each focuses on current conflicts, fought on ever-shifting fronts, by elite units whose work is often top secret, and each happens to feature a lead actor from the Philadelphia suburbs.

But to “SEAL Team”s David Boreanaz (“Bones”, “Angel”), who grew up on the Main Line as the son of now-retired 6ABC weatherman Dave Roberts, and “The Brave”s Mike Vogel (“Under The Dome”, “The Help”) of Warminster, the resemblances largely end there.

“It’s a completely different show”, Boreanaz said of “SEAL Team”, in which he plays Jason Hayes, leader of a unit of Tier One Navy SEALs. “These are the guys that go into the missions saving Capt. [Richard] Phillips [the container-ship captain played by Tom Hanks in the movie about Phillips’ rescue from Somali pirates] or some missions that we don’t even know about”.

“We’re a lot more Jason Bourne and they’re much more G.I. Joe – both fantastic, and I wish them the greatest of success”, said Vogel, whose character on “The Brave”, Army Capt. Adam Dalton, leads a special-operations team that draws from a variety of specialized military units, including the SEALs.

“I love that the cast is a diverse group of people”, Vogel said. “When these Omega teams are put together, they pull from people of different religious and ethnic backgrounds, they’ll pull women onto the teams, so that wherever we’re going, we have access to places that we couldn’t — that I, certainly, looking like I do, could not get. This show is not just catch-a-terrorist-of-the-week. We’re dealing with international arms dealers and drug cartels and bad dudes the world over”.

He also feels a rooting interest in the CBS series. “One of my dearest friends, Max Thieriot, is on [SEAL Team], and we’ve talked about this a lot”, said Vogel. “The more of these shows that find success, the better the chances of bringing a lot of attention to veterans’ issues and things like that, which is what we want”.

With another military drama, “Valor”, about an elite unit of U.S. Army helicopter pilots, premiering Oct. 9 on The CW, and the History Channel having ordered a second, 10-episode season of its own SEAL Team drama, “Six”, it might seem as though television was interested only in dealing with the high-stakes stories of the military’s most highly trained forces.

High stakes are part of it, said “Valor” creator Kyle Jarrow, but “the reality of warfare in this day and age, particularly in the United States, is that more and more military incursions are being done by special ops. We’re not involved in a major ground war right now, and …American special ops are operating in something like over 100 countries in the world carrying out missions”.

“This is the kind of thing that happens behind the curtain”, said Mikal Vega, a former SEAL who’s a technical adviser on “The Brave”. “This show in particular is about moving the chess pieces around to create an advantageous scenario where, when the regular forces do come in, that they have the highest chance of success”.

“SEAL Team”s focus includes the home lives of its characters, but “The Brave”, Vega said, is “all about the missions”. “SEAL Team” creator Benjamin Cavell doesn’t read the uptick in military dramas as any kind of response to last year’s presidential election.

“I think we want to be true to the people we know who do this for a living, and, frankly, the things that they do transcend politics”, Cavell told reporters last month. “They do that work no matter who’s in the White House and whether they voted for that person or not”. 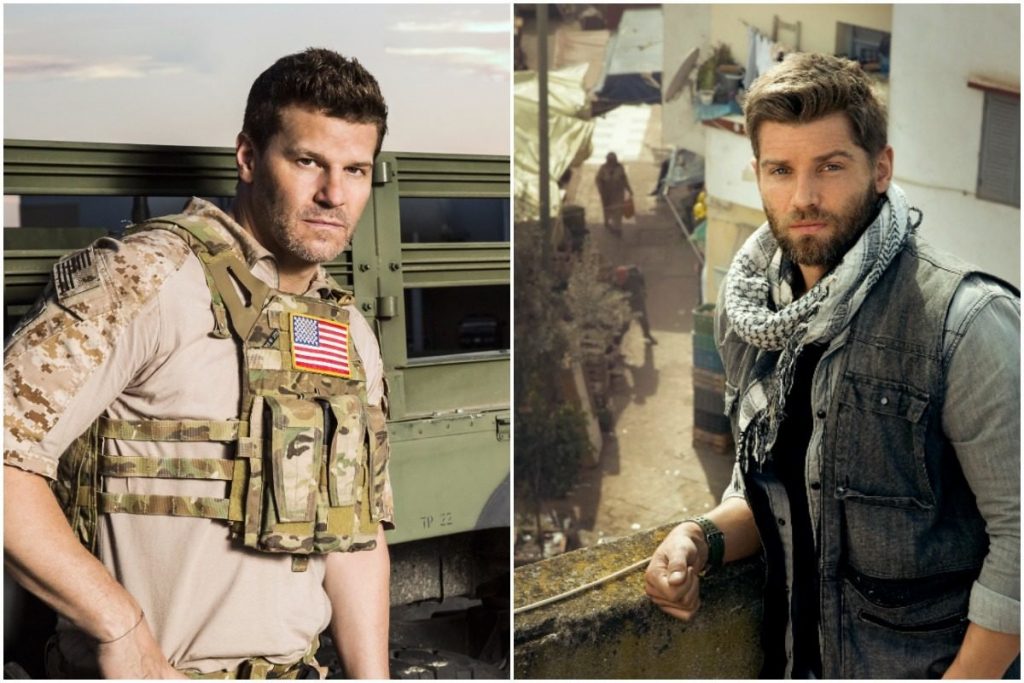 Work, and plenty of it, is something Boreanaz and Vogel do have in common.

Boreanaz, who’s worked steadily in television since his debut 20 years ago as the vampire Angel in “Buffy the Vampire Slayer”, agreed to take over from actor Jim Caviezel as the lead of “SEAL Team” in March, even before Fox had aired the finale of “Bones”, where for 12 seasons Boreanaz costarred as FBI agent (and former Army Ranger) Seeley Booth. (He’d earlier passed on “SEAL Team”, he said, because he didn’t want to commit to so much time away from home. Though the pilot was shot in Louisiana, the show’s now based in Los Angeles, where he lives with his family.)

Some actors might have opted for a break, but “I just like to work”, said the Malvern Prep grad. “I always had a job”, starting in sixth or seventh grade at a local farmers’ market. His parents were “always like, “Get a job. Work when you can work, know the value of it and what it takes”. He recalled working at a Christmas tree lot where “we would have to put up over a thousand flat poles in the ground. And you’ve got to dig it with a pick and a sledgehammer, get the hole started and… put all these poles in and get the lot set up. And then the trees would come in on like Day 3, and you’d have to unload a thousand trees [and] stack them”.

Working construction during the summer, the first day, “I showed up with a thermos and a hammer from like 1962 – it was a wood hammer. And they’re like, “This kid’s never going to last”. And I got beat up that day, I hit my thumb maybe four times, I had splinters, and it was exhausting. Well, the next day – I went home and I said, “Mom, I need this, this, this, and this. I need the right hammer, I need a belt, I need a cooler [to carry lunch]”, and I showed up at work, on time, with the right stuff, and ended up staying and working with those guys for four years. And I learned hard work”.

It’s an ethic he extends to his acting. Boreanaz, who’s also a producer on “SEAL Team”, has worked for many years with acting coach Ivana Chubbuck. When we spoke in early August, the third episode was in production and the two were still engaged in further developing his “SEAL Team” character, he said. “You’ve kind of got me at the beginning of it”.

Vogel, whose father sold his plumbing business last year — “I grew up working with him from the time I was 6, and every summer, on my days off, I’d have my hands in toilets”, the William Tennent High grad told me a few years ago — also likes to keep busy.

Hour-long network dramas are notorious for long hours, but that was apparently part of the appeal to Vogel of “The Brave”, which after filming its pilot in Morocco is now based in Albuquerque, N.M.

“I love film for my ADD-ness”, he said. “Every six months, I can go in and play a different character, do a different thing. But where film worked against me was that blue-collar worker mentality, which was, I feel like I’m sitting on my butt doing nothing” too much of the time.

The beauty of doing TV, which he called “tough, quick work”, is that, though the schedule might be crazy, “you feel like you’ve got a J-O-B and it’s really, really nice”.