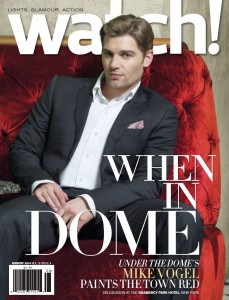 MAN ABOUT TOWN
Under The Dome’s Mike Vogel on marrying young, learning to embrace the unknown and staying alive… For now

On the Season Finale of last year’s summer hit Under The Dome, Mike Vogel had a noose around his neck – Not so much a cliffhanger as a cliffhaning. Big Jim (Dean Norris), mayor of the town that gets trapped under a mysterious dome in the hit-Stephen-King-book-turned-hit-show, had just sentenced Vogel’s character Dale “Barbie” Barbara. to die for crimes he didn’t commit, and then the episode ended. Fortunately, he survived… For now.

“We just started filming Episode 3, so I don’t think it’ll be a secret that I didn’t actually hang”, says Vogel, calling in from the set in Wilmington, NC. “Aside from some minor rope burn, Barbie finds a way to talk his way out of it”. Barbie’s salvation – And therefore Vogel’s  – Was anything but a sure thing, because Under The Dome  isn’t afraid  of killing off its stars. Not one but two main characters bit the dust in the Season 2 premiere of a show that has transfixed almost 15 million views every week – Big numbers for a summer run.

Vogel’s ex-Special Forces character is a large part of the show’s success. He’s an enigmatic anti-hero, who puts out fires, puts up a fight with the bad guys and puts the moves on Rachelle Lefevre’s character, Julia. This Season, Barbie will put reason aside and finally grapple with what the dome is and who put it there – Sort of like Vogel has had to do in real life with this genre. “In a way, Barbie and I  are going on very parallel journeys”, says Vogel, “Because I’m not a huge sci-fi fan… And I know I’ll catch flak from every sci-fi fan out there for saying that!”.

Mostly, though, the 34-year-old  actor is just happy the show is working – Especially as someone who has starred in shows that found critical acclaim but not critical mass (see: Pan Am). “Rachelle and I looked at each other halfway through the first Season of filming this and said, “Well, neither of us  has ever been on a show that’s gone past one Season, so you’re all screwed, sorry!” When it really found traction and found an audience, I was pleasantly surprised”.

Helping hold on to that audience are Stephen and Steven (King and Spielberg, respectively, the exec producers), who work in very different ways. King comes to the set, gives notes on scenes, and even wrote the first Episode of Season 2. Spielberg watches from afar and no news is good news. “Spielberg keeps calling me, texting me late at night with all these interesting movie ideas”, jokes Vogel, “And I’m like, “Steven, Steven, calm down, I’m filming your show right now, give me some time”. Vogel adds more seriously: “I have done several movies for DreamWorks and you never see him, but he’s very involved in his projects. He watches everything, knows exactly  what’s going on, and hopefully you don’t ever hear anything because when you do, it’s because something’s not right. And we’ve been fortunate so far”.

His own fortune is the result of a work ethic instilled in him by his father, a plumber in Pennsylvania who started bringing his son along on jobs when he was 6. As Vogel puts it, “I came from nothing, and it’s hard to forget those days of sticking your hand in a toilet  and digging sewers. It’s humbling”. After starting out as a model, Vogel got his first acting gig in his early 20’s on the sitcom Grounded For Life, then his first film: The Texas Chainsaw Massacre. Along came roles in films like The Sisterhood Of The Traveling Pants, Poseidon, Cloverfield, Blue Valentine, and She’s Out Of My League, and in the TV series Bates Motel, but as him what his first real break was and Vogel chracteristically modest. “I’m still waiting on that breakout role”, he says, laughing. “There’ve been so many different movies where you’ll  hear from people, “Hey, listen, you’re going to have to build the fence higher after this one”, and it never happens. But what I love is I’ve been able to do a lot of high profile, good projects over the years and still maintain a bit of anonymity”.

Ducking the tabloid glare has actually been pretty simple: Vogel devotes his time-off-camera to his wife, Courtney, and three kids, all of whom he credits with keeping him sane in an insane business. “I get to go home to my family and have my wife slap me around and say, “Hey, I know you think you’re something hot, but go change a diaper”. It puts everything in perspective”. They’ve been married for 11 years, though Vogel insists he crashed  and burned the first time he met his bride-to-be, also former model. “I was never, ever, ever good at talking to women”, he says. “I was so dumbstruck by her beauty that I literally turned my back on her and she was asking all these questions to the back of my head. I could not formulate a sentence beyond one-word answers”. Three months later they were dating, and before long they were married in the same church as Vogel’s parents.

Given the chance to do it all over again, would he still do it that young? “Oh yeah, absolutely”, he says, without hesitation. “Marriage is certainly something you don’t rush into, but when you know, you know. She’s my best friend, and I knew one of two things was going to happen: We were either going to get married young and grow up and grow apart, or grow up and grow together. Fortunately, we grew together”. After stints in L.A and Austin, the Vogels have put down roots on a farm outisde of Nashville, where the kids get to run free and dad gets to ride dirty. “I make believe I’m a farmer, throw on a cowboy hat and ride around on a tractor  and probably ruin my land”, says Vogel. What California had in wine, Tennessee has in whiskey – and the homegrown habits that come with it. “My neighbors and I sit out on a front porch one some rocking chairs listening to Hank Williams JR., sippin’ just a really cool thing”. His other favorite pastime is flying (he’s a licensed pilot) and the best air advice he ever got – to retrain with an instructor for a week after finishing an acting project before getting back in the cockpit alone – Came from none other than Kurt Russell.

As for what’s next, Vogel just starred in Cory Monteith’s final movie, McCanick, and will appear in a dark indie called The Boy with Rainn Wilson in 2015. But for now he has to get back to the bubble to finish episode 3 of Under The Dome. What is he doing to ensure his neck doesn’t end up in another noose? “Certainly it’s in the back of your mind”, he says. “I just keep sending lavish gifts to everyone who’s important and hopefully they’ll feel bad when and if that time comes”. Here’s hoping it doesn’t.