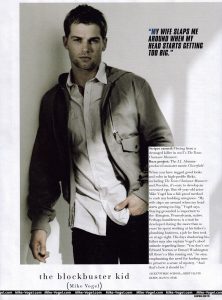 When you have rugged good looks and roles in high-profile flicks, including The Texas Chainsaw Massacre and Poseidon, it’s easy to develop an oversized ego. But 28-year-old actor Mike Vogel has a fail-proof method to curb any budding arrogance. “My wife slaps me around when my head starts getting too big”, Vogel says.

Staying grounded is important to the Abington, Pennsylvania, native. Perhaps humbleness is a trait he developed during the more than 10 years he spent working at his father’s plumbing business, a job he first took on at age eight. His days shadowing his father may also explain Vogel’s aloof attitude regarding fame. “You don’t see Edward ‘Norton or Denzel Washington till there’s a film coming out”, he says, emphasizing the need for leading men to preserve a sense of mystery. “And that’s how it should be”.