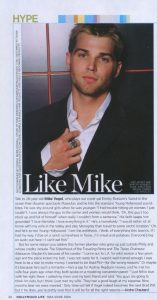 LIKE MIKE
Talk to 26-year-old Mike Vogel, who plays our cover gal Emmy Rossum’s fiancé in the ocean liner disaster spectacle Poseidon, and he hits the standard Young Hollywood soundbites. He was shy around girls when he was younger: “I had trouble hitting on women. I just couldn’t. I was always the guy in the corner and women would think,”Oh, this guy’s too stuck up and full of himself” when really I couldn’t form a sentence”.

His faith keeps him grounded. “I love the bible. I love everything in it”. He’s a homebody: “I would rather sit at home with my wife in the Valley and play Monopoly than travel to some exotic location”. Oh, and he’s so not Young Hollywood: “I am the antithesis, I think, of everything this town is, if I had my way, I’d be on a ranch somewhere in Texas… I’m meat-and-potatoes. Everyone’s big on sushi out there-I can’t eat fish”.

But for some reason you believe this former plumber who grew up just outside Philly and whose credits include The Sisterhood Of The Traveling Pants and The Texas Chainsaw Massacre. Maybe it’s because of his candor: “I came out to LA for pilot season a few years ago and the place kicked my butt. I was not ready for it. I wasn’t well-trained enough. I was here to be a star, to make money. I wanted to be Brad Pitt – for the wrong reasons”.

Or maybe it’s because he’s such a romantic-he’s a sap for Audrey Hepburn movies, and he met his wife four years ago when they both spoke on a modeling convention panel: “I just fell in love with her right there. I called my mom and my best friend and said, “You guys are going to think I’m nuts, but I think I just met my wife. They had a good laugh at my expense. Nine months later we were married”. Only time will tell if Vogel indeed becomes the next Brad Pitt, but if he does, you’re pretty sure that it will be for all the right reasons.