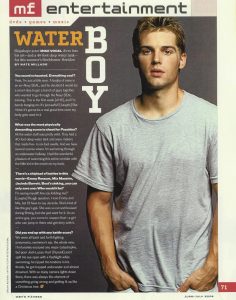 You sound exhausted. Everything cool?
Yeah, I’m just a little sore. A buddy of mine is an ex-navy SEAL, and he decided it would be a smart idea to get a bunch of guys together who wanted to go through the Navy SEAL training. This is the first week [of 16], and I’m barely hanging on; It’s just awful! (laughs) But I think it’s gonna be a real great time once my body gets used to it.

What was the most physically demanding scene to shoot for Poseidon?
All the water stuff was pretty wild. They had a 40-foot-deep water tank and wave makers that made five-to-six-foot swells. And we have several scenes where I’m swimming through an underwater hallway. I had the wonderful pleasure of swimming this entire corridor with the little kid in the movie on my back.

There’s a shipload of hotties in this movie-Emma Rossum, Mia Maestro, Jacinda Barrett. Boat’s sinking, you can only save one: Who would it be?
I’m saving myself! Are you kidding me? (laughs) Rough question. I love Emmy and Mia, but I’d have to say Jacinda. She’s kind of like the guy’s gal. She was so cut and bruised during filming, but she just went for it. As an active guy, you come to respect that-a girl who can jump in there and get dirty with it.

Did you end up with any battle scars?
We were all back and forth fighting pneumonia, swimmer’s ear, the whole nine. I fortunately escaped any major catastrophe, but poor Josh Lucas: Kurt Russell and I split his eye open with a flashlight while swimming; he ripped the tendons in his thumb; he got trapped under water and almost drowned. With so many camera lights down there, there was always this element of something going wrong and getting lit up like a christmas tree.