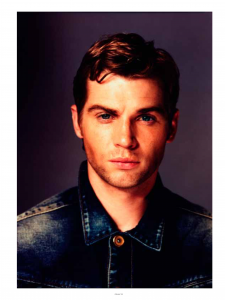 Playing a hot shot pilot from the Midwest in the new ABC hit show Pan Am is a slight departure from his usual movie roles for Mike Vogel. “TV is a different animal”, says Mike, “With any luck you need to be prepared to live with this character for seven years or more”. An actor’s challenge when approaching a TV role like Mike’s is to keep it fresh for the long haul.

Talking about work, Mike is excited about the challenge of breathing life into a character, taking words, thoughts and ideas that a writer has put on the page and bringing them to life. It really is all about watching people behave and realizing how unique we all are. Acting has taught Mike a lot, it taught him how to be more attentive and aware in everyday life, using his focused attention as the life blood of his craft. Using music as a way to bring him into a specific place and zone when working, he says he detaches himself easily of his characters, thanks to his beautiful two-and four-year-old daughters bouncing off the walls, “That will snap you back into reality real quick!”.

Looking at his future and his roles to come, Mike mentions being part of a WWII movie, as an homage to his grandfathers. Fascinated by that generation, he remembers watching Saving Private Ryan with his grandfather, watching him react to it and thinking, “I need to be a part of something that can affect people that deeply”.