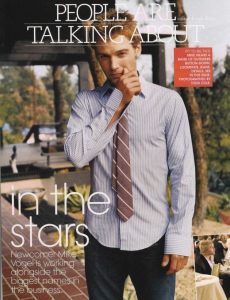 Mike Vogel might be a master of making it look easy witness his deeply laid-back turn opposite Jennifer Aniston and Shirley MacLaine in this month’s Rumor Has it-but the 26 year old insists that his journey to the big screen was no cakewalk. As a plumber’s son in Philadelphia, he explains, “I was always a ham, imitating people and playing jokes”, yet he never considered class clown a viable career option. It was only after being approached by an agent that Mike decided to give acting a go. “I’d get up at 4:00AM”, he recalls, “take the train to New York for classes and auditions, and then come home and spend the night plumbing with my dad. It was tough, but it was all worthwhile when everything started to happen”.

“Everything” includes last summer’s The Sisterhood Of The Traveling Pants; Caffeine, a coffee-shop-set ensamble piece that’s possibly going to Sundance this season; and Poseidon, next spring’s sure-to-be-a smash remake of 1972’s shipboard saga The Poseidon Adventure. Mike likes the simple life, but he says he’s not at all nervous about the fame that a breakout role in such a big-budget action flick might bring. Working with “everyday guys” like Kurt Russell and Richard Dreyfuss has been a comforting experience, he reports. “It’s given me a lot of excitement about my future”.