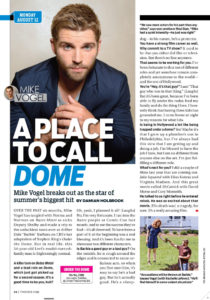 Over the past six months, Mike Vogel has tangled with Norma and Norman on Bates Motel as sicko Deputy Shelby and made a trip to the unluckiest town ever as drifter Dale “Barbie Barbara on CBS’s hot adaptation of Stephen King’s Under The Dome. But in real life, this 34-year-old Levi’s model-turned-family man is frighteningly normal.

A killer turn on Bates Motel and a lead role on Dome, which just got picked up for a second season. It’s a good time to be you, huh?
Oh, yeah, I planned it all! [Laughs] No, I’m very fortunate. I ran into the Bates people on Comic-Con last month, and to see the success they’ve had-it’s all deserved. To have been a part of it at the beginning was a real blessing. And it’s been fun for me to showcase two different characters.

Is Barbie a good guy or a bad guy?

On the outside, he’s rough around the edges and is connected to some nefarious acts, so when you first meet him, it’s easy to say he’s a bad guy. But he’s actually good. He’s a sheepdog-in his nature, he’s a protector.

You have a strong film career as well, why commit to a TV show?

It used to be that you either did film or television. But there’s no line anymore.

That seems to be working for you.

I’ve been fortunate to do a ton of different roles and yet somehow remain completely anonymous to the world and the rest of Hollywood.

I am! “The guy who was in that thing.” [Laughs] But it’s been great, because I’ve been able to fly under the radar, feed my family and do the thing I love. I honestly think that having three kids has grounded me. I come home at night to my reasons for what I do.

Is being in Hollywood a lot like being trapped under a dome?

Yes! Maybe it’s that I grew up a plumber’s son in Philadephia, but I’ve always had this view that I am getting up and doing a job. I’m blessed to have the job I have, but I am no different from anyone else on the set. I’m just fulfilling a different role.

What’s next for you?

I did a couple of films last year that are coming out. Jake Squared with Elias Koteas and Virginia Madsen. And this great movie called McCanick with David Morse and Cory Monteith.

He talked to us right before he entered rehab. He was so excited about that movie.

[His death was] a tragedy, for sure. It’s a really amazing film.