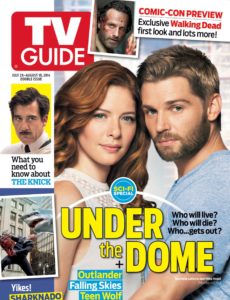 DANGEROUS CURVE
Plagues! Acid rain! Murder! And… romance? Things are heating up on Season 2 of Under The Dome

Chester’s Mill IS having one crazy summer-and things are about to get even wilder on the CBS sci-fi hit Under The Dome. Not only is there a killer running amok, but supplies are running dangerously low and the dome seems to be sending out messages that the trapped townsfolk had better start listening to… or else.

“Is the dome bringing Armageddon to Chester’s Mill?” asks executive producer Neal Baer of the recent infestation of cropkilling caterpillars and freakish weather events. “Or are the plagues and acid rain a result of the residents’ not taking care of the enviroment?”

Or perhaps these hellish happenings have to do with the fact that the citizens have not been very neighborly since the invisible force field enveloped their tiny New England hamlet. Selfrighteous politican Big Jim (Dean Norris) have developed a seriously twisted God complex since “being saved” after attempting to hang himself, lovers Barbie and Julia (Mike Vogel and Rachelle Lefevre) are keeping all sorts of secrets from each other, and high school science teacher Rebecca (Karla Crome) has concoted a deadly plan to solve the dwindling-resources dilemma.

“Killing a percentage of the town means the remainder can live”, explains Baer. So, thanks to Rebecca’s urging and tailor-made stain of swine flu targeting a select group of locals Big Jim agrees to go forward with the ominous population-control plot. “Obviously, with something this nefarious, Julia will do whatever she has to do to stop them”, says Lefevre, adding that “What’s really scary about Big Jim and Rebecca’s mission is that she realizes just how little she can trust anyone”. Including beautiful Barbie, whose unlikely alliance with the small-town Boris and Natasha will only ratchet up the tension between the couple.

“Barbie find himself stuck in the middle between those two and Julia”, says Vogel. “But for him, it’s more about that old adage of keeping your friends close and your enemies closer. Barbie wants to hear them out and see what they’re up to so he can keep an eye on them”. While Vogel admits leaving Julia in the dark about Barbie’s espionage act is certain to “cause problems”, two even bigger threats loom on the horizon. The first is the reveal of a major secret regarding Barbie’s connection to the dome itself. “Last season, it was assumed that Barbie was just an unfortunate stranger who happened to be passing through town when the bubble came down and trapped him there”, says Vogel. “This year, we’ll find out that Barbie has a much bigger role in the whole thing. It wasn’t an accident that he was in Chester’s Mill at that time”. Second, and scarier, is Big Jim’s brother-in-law, Sam (Eddie Cahill), the recluse who has been getting awfully cozy with Julia. “So far, he seems to be like everyone else-someone trying to do the right thing to make up for mistakes he made in the past”, says Lefevre. Those amends will probably have to wait now that it’s been revealed the dash-waitress Angie (Britt Robertson) to death. Baer says Sam’s motives for committing the murder will be uncovered slowly, but Vogel hints that the guy may have more to hide than just the blood on his hands. “He’s had a lot of previous interactions with some of the strangers who have come into these character’s lives”, the actor says.

Chief among them is Melanie (Grace Victoria Cox), the amnesiac who burst out of the lake during the Season 2 opener’s magnetic storm. Sice her watery arrival, the traumatized teen has inexplicably been able to recall the combination of the locker near where Angie was killed-we’ll soon learn what was in that locker and has shocked Joe (Colin Ford) and Norrie (Mackenzie Lintz) with her school student who went missing a quarter-century earlier. On the July 21 episode, the mystery deepened after a trip to the site of a 24-year-old meteor strike jogged Melanie’s memory. Turns out the new girl in town may be a lot older than she looks. So has the dome begun to mess with time and space, too? And what is going on with the world outside of the Chester’s Mill bubble? Between Melanie’s murky ties to the town’s past, the accelerated growth cycles of those creepy caterpillars and the fact that Big Jim’s unstable son Junior (Alexander Koch) received an email from his mother (Sherry Stringfield) nine years after she allegedly killed herself, all signs are pointing to some sort of time warp that reaches beyond the dome’s borders.

Whatever it is, Vogel is thrilled. “Neal and the writers have come up with a super-interesting way to broaden the show’s world”, he says, teasing that Dome is going to get even trippier. (Spoiler alert: Someone makes it out of Chester’s Mill alive.) “There will be some answers, but those answers will open a whole new can of worms”. Hopefully not flesh-eating ones.