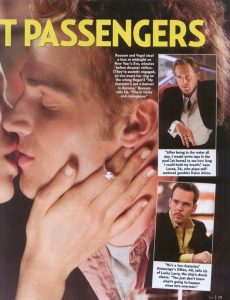 POSEIDON’S HOT PASSENGERS
First look! The stars of this summer’s $175 million blockbuster in the making take US behind the scenes of their sinking-ship adventure

A wave topples the Poseidon luxury liner, ship mates (including Josh Lucas, Emmy Rossum, Fergie, Kevin Dillon and Kurt Russell) must find a way off the capsized vessel in the May 12 action flick (which has a touch of romance, too). How does the thriller, directed by Wolfgang Petersen, compare to the 1997’s famed disaster at sea? “Titanic was more of a love story”, Russell tells US. “This is about a rough wave!”.

Filming the tale-a remake of 1972’s The Poseidon Adventure, meant the cast was wet for months. “We were diving 20 feet underwater in enclosed spaces, and there were times I was scared”, Rossum tells US of the L.A-based shoot. “We had wet suits under our clothes, but my jeans were so tight, I couldn’t wear one”. Rossum and Vogel steal a kiss at midnight on New Year’s Eve, minutes before disaster strikes. They’re secretly engaged, so she wears her ring on the wrong finger. “My character’s not a damsel in distress”, Rossum tells US. “She’s feisty and courageous”.

Fergie, 31, dazzles as singer Gloria, who performs two original songs-a ballad and a Latin shaker, before the wave hits. “It’s not a huge role”, she tells US, “but it was great to work on such a big set”.

“After being in the water all day, I would swim laps in the pool at home to see how long I could hold my breath”, says Josh Lucas, 34, who plays self centered gambler Dylan Johns. Entourage’s Dillon, 40 tells US, “He’s a fun character”, of Lucky Larry, the ship’s drunk sleaze. “You just don’t know what’s going to happen when he’s onscreen”.