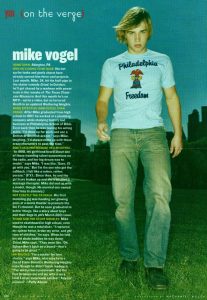 HOMETOWN: ABINGTON, PA
Why he’s going to be huge: His hot surfer looks and goofy charm have already earned him three cool projects. Last month, Mike, 24, hit the half-pipe in the skater comedy Grind. In October, he’ll get chased by a madman with power tools in the remake of The Texas Chainsaw Massacre. And this month he’s on MTV-not in a video, but as tortured Heath in an updated Wuthering Heights.

More effective (and cuter) than Drano: After Mike graduated from High School in 1997, he worked at a plumbing company while studying history and business at Philadelphia School of Bible. Even back then he was testing his acting skills. “I’d show up for work and use a British or Scottish accent”, says Mike, laughing. “I’d always come up with these crazy characters to pass the time”.

Don’t hate him because he’s beautiful: “In 1998, my girlfriend heard about one of those traveling talent conventions on the radio, and her big dream was to model”, says Mike. “I was like, “Sure, I’ll go with you”. But I’m the one who got the callback. I felt like a rotten, rotten person”. (FYI: Since then, he and the girl have broken up and she’s become a massage therapist. Mike did end up with a model, though. He married one named Courtney in January).

Not exactly the catwalk: His first modeling gig was handing out glowing pens at a movie theater to promote the Sci-Fi channel. But he soon graduated to better things, like a story about boys and their dogs in YM’s March 2001 Issue.

Thank God for stunt doubles: Mike used to skateboard in High School, even though he was a total klutz. “I ruptured my spleen twice, broke my wrist, and got tons of stitches”, he says. When he told his old skate buddies he was doing Grind, Mike says, “They were like, “Oh, Spleen Boy’s back on a board-that’s going to be great”.

Aw shucks: “I’m a sucker for love stories”, says Mike, who says he is a fan of Emily Bronte’s Wuthering Heights even though he didn’t finish reading it. “I’ve always been passionate. But the love between me and my wife is on a level I never even knew existed”. Anyone jealous?