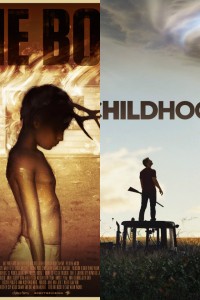 Mike has 2 projects that are about to be released on Blu-Ray and DVD, with the release dates being set for tomorrow (March 1), and we are really excited about it! Both of them will be available for purchase at Amazon.com.

First out is “The Boy” (2015) – The movie that tells a story about a father and his 9 year old son, who operates a floundering family business together – The Mt. Vista Motel. Ted’s (Son) fascination with death awakens with destructive consequences. Mike plays a father who ends up with his family at the Mt. Vista Motel.

And then we have “Childhood’s End” (2015) – Syfy’s Mini Series that follows a peaceful alien invasion of Earth by the mysterious Overlords, whose arrival ends all war and turns the planet into a near-utopia. Mike plays the Mid-Western farmer Ricky Stormgren, hand-picked by Karellen to be the ambassador for the Overlords.