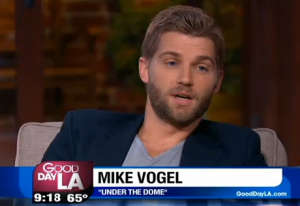 Mike Vogel‘s character on “Under The Dome”, the one that Mike calls the most masculine nickname on television, Barbie, has not had an easy time. He arrived in the town of Chester’s Mill just after having killed a man… The man whose wife he is now involved with, just before the townspeople got trapped inside a mysterious Dome. It’s now halfway through the show’s first season and it seems Barbie’s lies are finally beginning to unravel. Vogel says his character will soon be cornered by his own “cat-and-mouse game”.

“Barbie thinks he has his way out, because he only has to cop to a certain amount of the story, and as we’ll see in later episodes he eventually runs out of wiggle room”, he told Zap2It. “So you know, he kind of walks that line as much as he can, but he runs out of room eventually”.

Mike talks about his character Barbie being the anti-hero, how the show is starting to introduce the mythology of the Dome, how “Under The Dome” is changing the game of TV, a lot of plexi-glass touching, the conflict with Time Warner and CBS, and the third baby they’re waiting in the fall – It’s a boy!

Check out the video here.