New Mexico – and Albuquerque in particular, it seems – can stand in for almost anywhere in the world when it comes to film and TV productions.

That, as well as the state’s film incentives, is what piqued the interest of Dean Georgaris. He’s the creator of the upcoming NBC action drama “The Brave”, which premieres at 9 p.m. Monday. The series is one of the fall’s most anticipated shows, and it landed the coveted spot behind the ratings juggernaut “The Voice”.

The pilot episode was filmed in Morocco, then production moved to Albuquerque, where it is being housed at Albuquerque Studios.

“Here we are in Albuquerque, turning it into (places) all over the world. There is a lot you can make Albuquerque look like”, Georgaris said during an interview. For example, he said: “We’re in Nigeria for the second episode. Then the Ukraine. Then we’re going to use the old prison out near Santa Fe to play an Afghan prison because it looks like one. Then we have an episode in Mexico and a South America episode. It’s great”.

“The Brave” tells the stories of an elite American undercover military squad. The Special Ops group is led by Capt. Adam Dalton, who is played by Mike Vogel, working hand-in-hand with the Defense Intelligence Agency.

Anne Heche plays the part of the DIA’s deputy director, and her team of analysts guide the squad using the world’s most advanced surveillance technology from headquarters in Washington, D.C.

For the past three months cast members have made themselves at home in the Land of Enchantment, but not necessarily basking in its natural wonders.

The actors are being trained by former Navy SEAL Mikal Vega. “To get them into shape, I put a weighted vest on each actor and we all ran up La Luz”, Vega said. “Wait until you see the difference from the pilot until the end of the season. Each actor is much more fit”.

Vega served more than 21 years in the U.S. military and was the SEAL platoon leading chief petty officer, as well as U.S. Navy SEAL demolitions instructor. And he says he wanted the show to be as authentic as possible. But because Georgaris wants the cast to be a part of the community, the actors have turned up around town. For instance, part of the group recently participated in the “Horses for Heroes” event at the New Mexico State Fair. 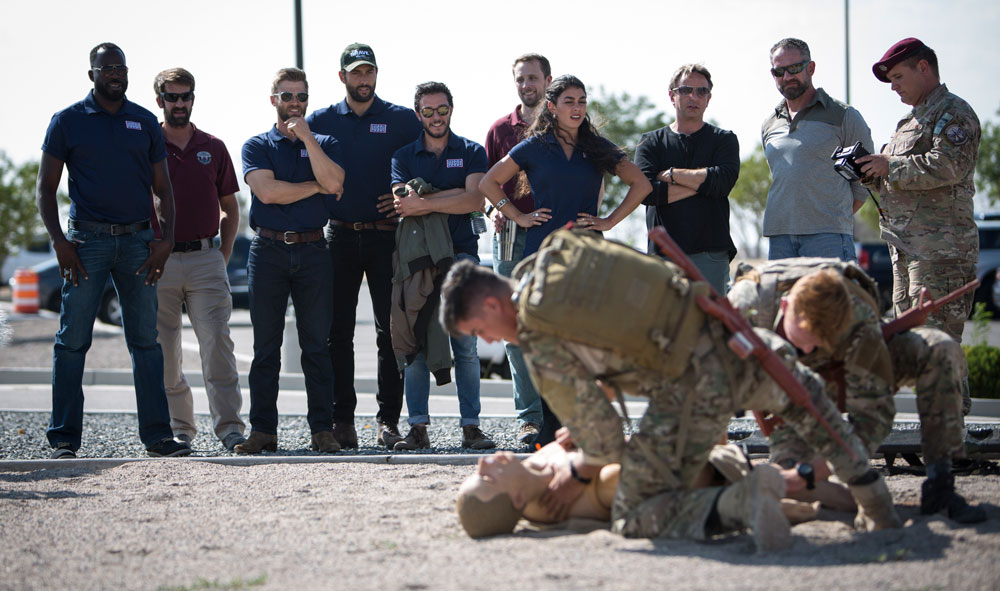 The cast also visited Kirtland Air Force Base on Sept. 11 to talk with military personnel and learn some tactics.

Georgaris said, “We set up a different type of training. We’re focusing on movement and teamwork. We’re not a shoot-’em-up kind of show. Each episode is about resilience and how each person can become more resilient on a daily basis”.

According to the New Mexico Film Office, the production will employ approximately 600 New Mexico crew members, 180 resident actors and stunt players, and approximately 4,000 New Mexico background talent. It films in Albuquerque and Santa Fe and there are 16 local crew in key and head positions on this production.

“Albuquerque gives us the opportunity to have so many locations. The crew is so deep and it’s really developing into one of the best places to film”, Georgaris said.